Programming for Kids: How to Create the Next Generation of Perfect Data Scientists and Machine Learning Engineers

Let’s start with a question, do you want your kid to become a successful engineer in the future? Because in this post we are going to talk about programming for kids and how they can become the next generation of perfect Data Scientists and Machine Learning Engineers.

Data Science and Machine Learning are subfields of Artificial Intelligence (AI). AI is the driving force in all the Information Technology sector, demonstrating a huge spectrum of capabilities and improvements that can be achieved if we are using its full potential and power in the right way.

The best Data Scientist and Machine Learning engineers are earning well over $100,000 per year. But the most important is that all of them have the chance to leave their trace and go down in history as the biggest masterminds that created something useful for their civilization.

Knowing these facts, we know that the popularity for such job positions skyrocketed and there are tons of academies and online courses that will help you gain significant knowledge. But are these courses enough, will they produce the ultimate engineers that will help us achieve the “state of the art” AI products.

The analyses and overall experience tend to show that the kids that are introduced to problems that acquire logical and mathematical thinking are the ones who become engineers in the future, the ones who will be the next great minds of our society.

We can see that almost everywhere in the world, schools are starting to introduce kids to programming languages and concepts, since those are the universal instruments for communication in the future.

Every school is trying to present its version of programming for kids, but is that enough? Is the programming knowledge we get at schools enough to help us be the best? Well, yes and no, with enough work outside your school tasks, obviously you will get the knowledge needed to be the best, or at least good enough.

But what if there is a way to do this better, through well-structured courses, from some of the best instructors and teachers out there presented through different coding games for kids that are available online (coding games online)?

That will test the kid’s logic and will make the programming for kids easier and will result in higher engagement degree from the kids who like to spend more time playing online video games.

Well, there is. This article is made in partnership with Juni Learning. They are an award-winning online computer science and mathematics academy that offers private online courses to students from ages 8–18. Juni Learning is founded by two Stanford graduates that worked at Google and had a wish to allow every kid in the world to became the crème de la crème in the Computer Science world.

Juni Learning has raised over $790,000 in October 2018, and has huge backing by Arielle Zuckerberg, the sister of Facebook founder Mark Zuckerberg as well as companies like Google, YouTube, Yahoo, Pinterest and universities like Princeton. You can read more for them on PC mag.

As we’ve mentioned already, the programming languages are the universal communication instruments of the future. Looking forward to the future, Juni Learning is focusing on making programming for kids adaptable for every kid, using popular tools, like coding games for kids, and logistic mathematical problems that the kids should solve playing these coding games for kids, and get a reward.

This is The Entire Computer Science Curriculum in 1000 YouTube Videos

We think that this concept is very helpful since most of the kids today want to spend huge time in front of their computers playing online video games like Fortnite, Call of Duty, DOTA2, Overwatch, Minecraft, and whatnot.

Coming with that fact, introducing education in the form of coding games for kids will make the programming for kids something that they will enjoy doing.

In this article, we are going to talk about the best toys, coding games for kids, tools, and applications that will improve the programming logic of every kid or adult, who is a newcomer in the programming world.

ThinkFun Code Master Programming Logic Game – With this screen-free board game, young children can pick up programming skills without a computer. The game focuses on building programming logic via tasks and challenges.

With nine conditional tokens and twelve action tokens, players will learn basic coding concepts, like loops and conditional branching. The difficulty levels range from beginners to experts, so it can be played by anyone from 8 to 50 year-olds.

Ozobot Bit Coding Toy Robot – Bit is a pocket-sized coding robot that is a master at fostering early STEM skills. Programming him is easy; the player must simply add the program OzoBlockly to their computer or mobile device, write up some code, and load their code to Bit by holding him to the screen. This award-winning toy brings coding to life, while simultaneously giving kids some hands-on experience with robotics.

LEGO Boost – LEGO Boost is an educational robot developed for kids between the ages of 7 and 12 years. LEGO Boost teaches kids how to build models, as well as how to code and control the robot using an included remote and the LEGO Boost app.

With a number of challenges to be completed and a large variety of models that can be built, this coding kit strives to not only introduce programming in a fun and hands-on way, but also improve critical thinking.

RoboZZle – RoboZZle is a social puzzle game that introduces basic programming ideas to kids. Through a series of community-created puzzles and simple commands, kids are introduced to increasingly more complicated programming concepts.

There are also a number of tutorials available to help kids create their own puzzles and games. The database of over 1,000 games and puzzles grows daily, so there’s always something new to learn.

Lightbot introduces concepts like planning, testing, debugging, procedures, and loops through a series of levels of increasing difficulty. 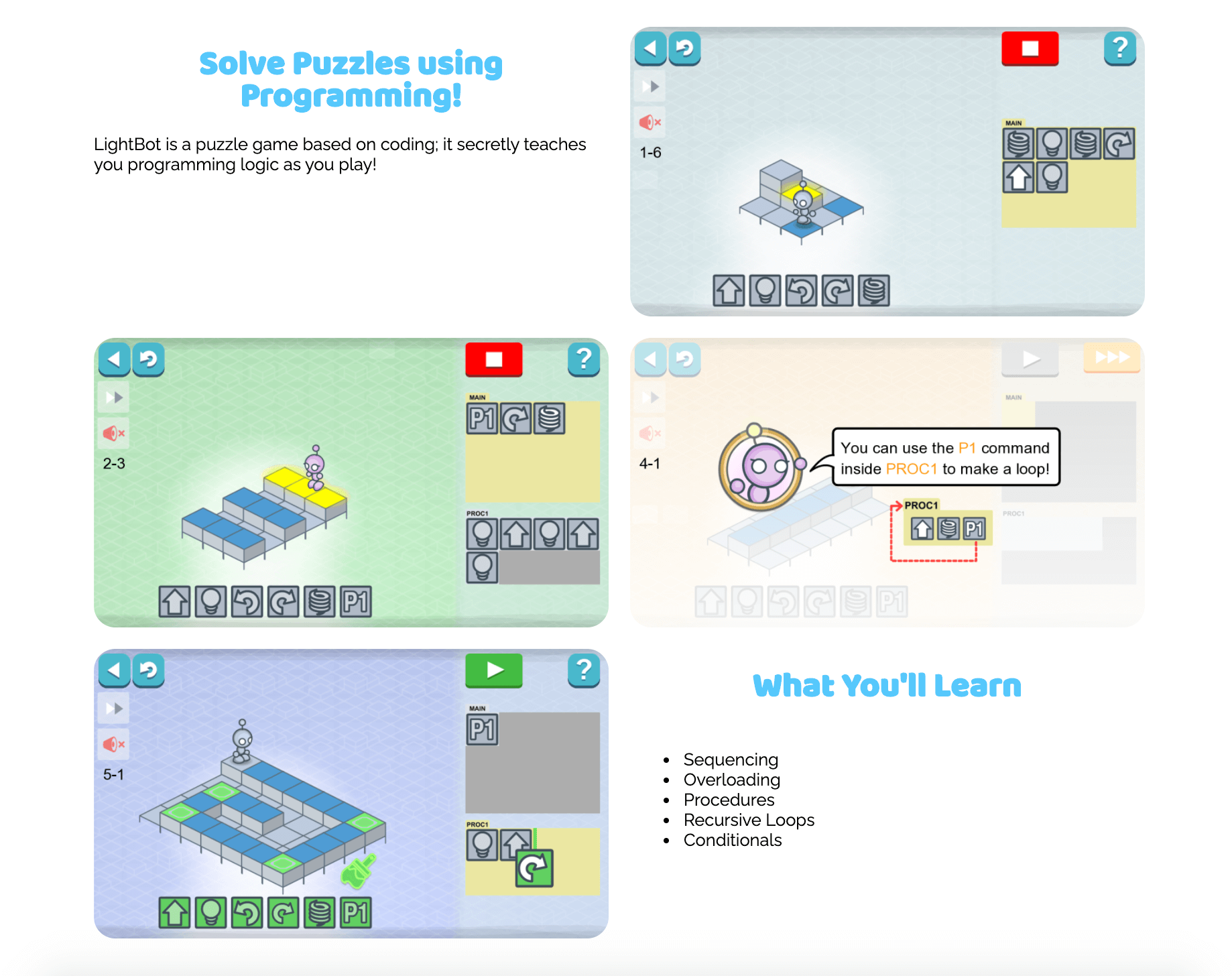 Codemancer – Through the coming-of-age story of a young girl trying to find her way and do good in the world, Codemancer teaches kids about the magic of coding. Using programming concepts, this programming game helps players navigate a fantasy world, in which there are a number of quests and challenges to complete.

The game has several stages that become more complex as new programming concepts, such as variables, conditionals, and functions, are introduced.

Machineers – Machineers is an adventure game that teaches kids to use coding principles to fix broken machines. The game focuses on logical thinking, planning, and procedural ideas. While the game doesn’t explicitly use code or specific programming languages, Machineers encourages the kind of essential thinking that is necessary for any programmer.

codeSpark Academy – This coding app uses a game-like interface to teach kids how to code. On their iPhones and iPads, kids are called upon to help characters, called The Foos, accomplish challenging tasks. Each world explores a fundamental coding concept, from sequencing to conditionals.

The app has a number of different parts, from puzzles that help foster problem-solving skills to an open play area, through which kids can code their own games and share them with a community of kid coders.

Hopscotch – Hopscotch is another iOS kid-friendly coding tool that kids can use to create their own games, apps, or animations.

One of our favorite coding apps, Hopscotch has a number of self-paced video tutorials that introduce kids to coding via popular games, like Pokemon Go. Hopscotch uses block-based coding, which makes it a good, fun supplement to learning Scratch.

Daisy the Dinosaur – Also available on Apple’s App Store, this app uses mini-games to teach kids the basics of programming. Kids use word commands to make Daisy the Dinosaur perform various moves. Each level has a new challenge, and these challenges introduce different programming concepts.

For example, in a loop de loop challenge, players can only use the spin command once. A hint suggests nesting the spin command inside the repeat five commands. This level introduces the idea of loops.

Code Adventures: Coding Puzzles for Kids – Suitable for kids 6 years of age and older, this mobile app has been developed for both Android and iOS-based smartphones.

It focuses on developing coding skills and sharpening logic via child-friendly puzzles. Kids learn the basics of every modern programming language through 30 well-crafted levels, which involve challenging puzzles and loveable characters.

The Snap Circuits Classic is a great place to start for kids who wish to learn the building blocks of everyday electronics, such as AM radios, burglar alarms, doorbells, and more. There are also kits with computer-interfacing projects, which have additional components that allow kids to develop more complicated projects.

Thames & Kosmos Chem C Series – Thames & Kosmos offers a variety of chemistry kits for different ages. The C500 is an ideal starter kit for kids ages 10 and above, with experiments focusing on the differences between solids, liquids, and gases, as well as how they react. This series also introduces electrochemistry with metals and salts.

GraviTrax – The GraviTrax interactive track system helps kids design and build race tracks for a gravity sphere, with the goal of using gravity, magnetism, and kinetics to get the sphere to the finish line. There are a variety of different tiles, levels, tracks, and features that offer endless possibilities for track designs.

This kit is a great way to make physics exciting for kids. It encourages experimentation with different pieces to discover how the laws of physics affect the path that the sphere takes. This is a great option for kids who love Primo Toys’ Cubetto, and want a more challenging option to further develop their coding skills.

The most important thing in everything you do is to start and to start in the right way. So for every kid that wants to be the next Elon Musk, Mark Zuckerberg or Albert Einstein, the best start is at Juni Learning. Help your kids to become the next generation of Data Scientist and Machine Learning engineers.

The team of experts will adapt the materials for every candidate, and will bring the best version out of them, opening their vision towards the future. Here you can join the best program for you.

If you are new to Machine Learning, Deep Learning, Computer Vision, Data Science or just Artificial Intelligence, in general, we will suggest you some of our other articles that you might find helpful, like: