How A Star (A*) Search Algorithm Works

A star is a graph traversal and path search algorithm, which is often used in computer science due to its completeness, optimality, and optimal efficiency.

Thus, if we are trying to find the cheapest solution, a reasonable thing to try first is the node with the lowest value of g(n) + h(n). 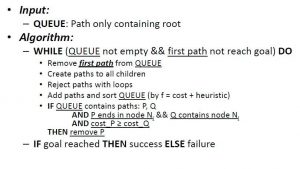 Image 1: Pseudo Code of an A Star Algorithm 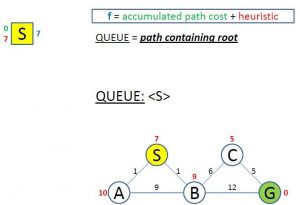 Image 2: The Problem of A Star Search Algorithm

On Image 2 we have the problem that we are going to use to show you how A star search algorithm works. The problem consists of finding the shortest path from the start node “S” to the goal node “G”.

From the starting point, we have a total cost of 7 since we don’t have any cost to reach to node “S” from node “S” and the heuristic from “S” to “G” is 7. 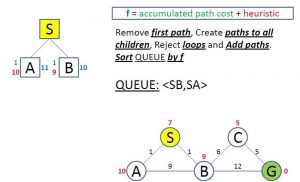 So, for now, we will continue evaluating the node with the lowest total cost. In this case that is the node “B”. 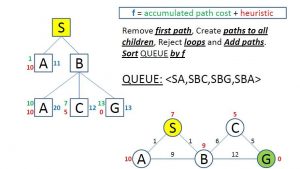 Image 4: Second Evaluation Through B

We can also see that now, all of these nodes have a higher total cost that the node “A” that we’ve visited in the first evaluation. 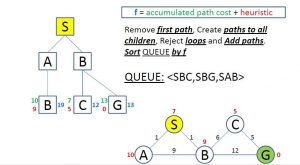 Image 5: Third Evaluation Through A

On Image 5 is shown the third evaluation, where we are going through the node “A”. We can see that from node “A” we can reach only to node “B” and that now the total cost is 19, which is higher than the total cost of the other nodes.

We can also see that we removed the path SBA since the total cost was the highest and we will never evaluate through that path. 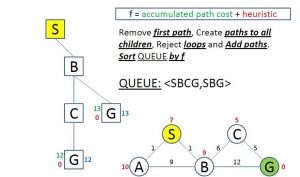 On Image 6 we can see that we’ve also removed the path SAB since it had the highest total cost and that way it will never be used. In this evaluation through the node “C” we’ve reached the goal for the second time. 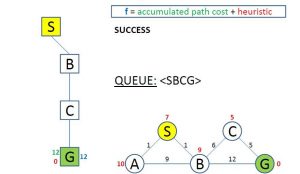 On Image 7 we can see that there is only one path in the queue, and that is the path with the lowest total cost of all, and that is our solution for this problem.

A star is one of the most popular solutions for many cases where it can be applied, even though it can be outperformed by algorithms that can pre-process the graph to attain better performance.

Learning how this algorithm works, will help you understand how can you search in graphs in very efficient ways.