Figma vs Adobe XD: Which Design Tool is Right for You or Your Team?

When it comes to choosing a UI design tool for you or your team, you have a lot of options to choose from. But as we all know, Figma and Adobe XD are two of the most popular tools for designing and prototyping user interfaces (UI) and user experiences (UX).

While both have their unique strengths and weaknesses, they share a number of similarities and differences that make them suitable for different use cases. I’ve also shared 11 time-saving Figma tips you should use for efficient workflow.

I’ve been using both and here will give you my honest thoughts on both platforms and which one I think is best for you or your team.

When I started with UI/UX design, I started with Adobe XD and I really liked it. After some time I started working for a company with other designers and they were using Figma because it was much better for teamwork. Since then, Figma is my go-to, but I work on XD here and there, just to keep up with the latest updates and features.

So, here’s my take on Figma vs Adobe XD:

First and foremost, both Figma and Adobe XD are cloud-based, which means that designers can access their projects from any device with an internet connection.

This is particularly useful for teams that need to collaborate on designs and ensure that everyone is working on the latest version of a project.

Another similarity between the two tools is that they both offer a wide range of design and prototyping features.

Both Figma and Adobe XD have vector-based drawing tools, a library of pre-made design elements, and the ability to create interactive prototypes that allow users to test out designs on different devices.

Despite their similarities, Figma and Adobe XD do have some key differences that make them better suited to different use cases.

Another difference between Figma and Adobe XD is their focus on collaboration.

Figma is designed to make it easy for teams to work together on projects, with features like real-time co-editing and the ability to leave comments on designs.

Adobe XD, on the other hand, is more focused on individual designers and offers fewer collaboration features. It is part of the Adobe Creative Cloud suite and is primarily used for user experience (UX) and user interface (UI) design. Adobe XD has a wide range of features that allow designers to create wireframes, interactive prototypes, and even animations. 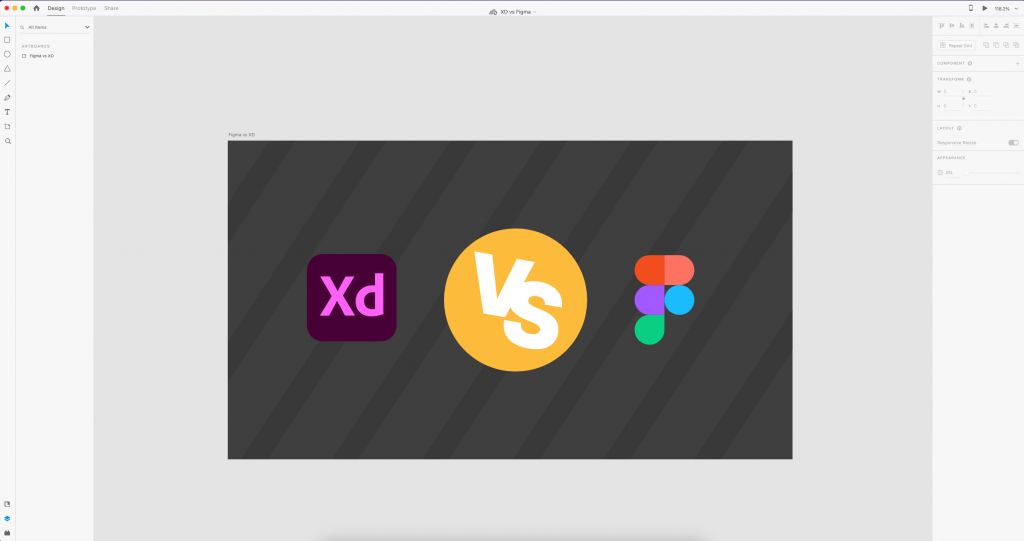 Given their similarities and differences, Figma and Adobe XD are each best suited to certain use cases.

As I said, Figma is a great tool for teams that need to work together on design projects. Its web-based nature makes it easy for designers to access their projects from any device, and its robust collaboration features allow teams to communicate and iterate on designs in real time.

Figma is also a good choice for designers who need to work on projects with a large number of stakeholders, as it allows users to share designs and collect feedback from multiple people.

Don’t forget to unlock the power of design with these 20+ UI design secrets.

Adobe XD, on the other hand, is a better option for individual designers who prefer a more traditional desktop-based workflow.

Overall, Figma and Adobe XD are both powerful tools for designing and prototyping UI and UX. While they share a number of similarities, their differences make them suitable for different use cases.

Figma is a great option for teams that need to collaborate on design projects, while Adobe XD is better suited to individual designers who prefer a more traditional workflow.

Adobe XD recently bought Figma for $20 billion in cash and stock and they want to usher in a new era of collaborative creativity.

Ultimately, the choice between Figma and Adobe XD will depend on the specific needs of your team. If real-time collaboration and a cloud-based platform are important to you, Figma may be the better choice. If you need more advanced prototyping and animation capabilities, Adobe XD may be the way to go.

Both Figma and Adobe XD are great design tools that can help to streamline your design process and make it easier for teams to collaborate. It’s a matter of weighing the pros and cons of each tool and deciding which one best fits your team’s specific needs and workflow.

About the Author: Daniel Petrevski

As a UI/UX designer, with also has 6 years of experience in WordPress and SEO, I decided to start writing useful posts and articles on this blog and help you learn and solve the problems in your career.