In this composition, I am going to compactly explain the difference between UI design and UX design. These two terms are definitely most often confused and conflated terms in web and app design.

They are always placed together in a single term, which is UI/UX design (you can also find it as UX/UI design) so most people don’t really understand their differences.

Veritably frequently I get asked what I work and when I answer UI/UX design I try to explain them as short and understandably as possible.

So, I decided to write this article and by the end of it, you will understand what’s the difference between UI and UX design and how they relate to each other.

What is UI design?

The UI stands for “user interface” which is a place where interactions between humans and machines occur. The user interface is what people see and use when they interact with a computer, phone, or any other type of electronic device.

It is the way in which a user navigates through the system and interacts with it. Practically, UI designers are graphic designers and they’re concerned with aesthetics.

The user interface designer is the one who decides any sort of visual element, interaction animation, color schemes, button shapes, the width of lines, and the font used for text. We also must keep in mind that the user interface is built to be intuitive so that users can easily understand how to navigate through it. That being said, the design must also be aesthetically pleasing so that people are drawn to using it.

In order to make your product appealing to customers and to enhance their experience while using it, you need an interface that communicates well and is easy to use. Here are some tips on what you should keep in mind when designing one: 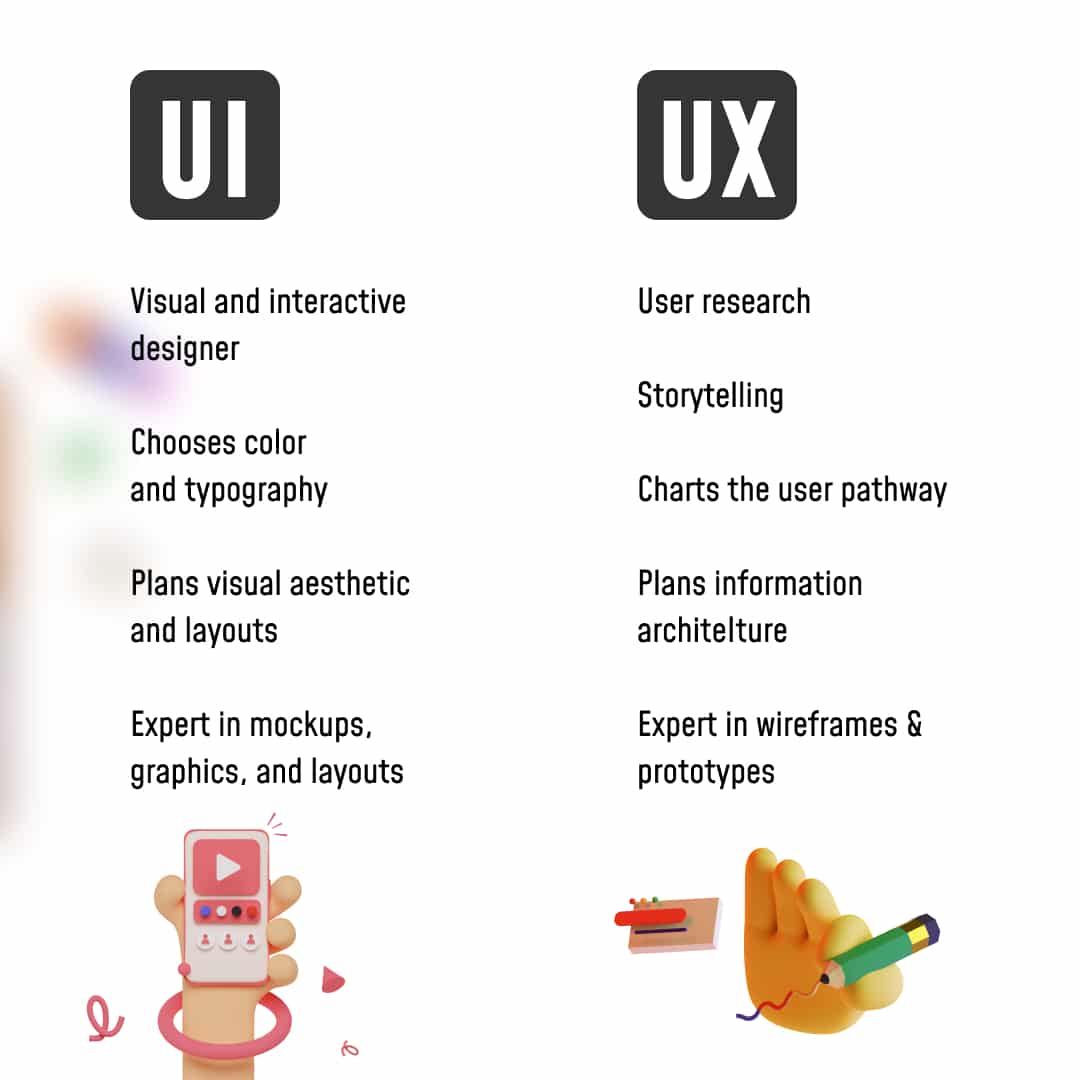 The difference between UI design and UX design.

What tools are used for UI design?

You can find a lot of tools that will help you create your beautiful user interface designs, and here I will share a couple of them that I think are the most popular:

What is UX design?

User experience design, or UX design for short, is a process for designing better user interfaces by taking into account how people interact with and respond to various products. The main goal of the UX designer is solving user problems and creating products that are relevant, functional, accessible, and at the same time enjoyable to use.

Being a user experience designer doesn’t include only making the software easy to use, but also designing the other experiences related for example the marketing campaign, the packaging, etc. You can find the UX in real life, everything is created with that in mind, we just don’t seem to think.

For example, get in the car and just imagine if the steering wheel and pedals switched places, would that be a good experience for driving? You can find examples like this in everything around you and those are really good inspirations to understand how the process is going and how you can solve the problem that you have in your design.

Some of the most common tasks for a UX designer are:

By now, you have to really understand the difference between UI design and UX design. You can choose which one you want better and work only on that, but it’s best when you can do both, that’s why it is called UI/UX design.

About the Author: Daniel Petrevski

As a UI/UX designer, with also has 6 years of experience in WordPress and SEO, I decided to start writing useful posts and articles on this blog and help you learn and solve the problems in your career.